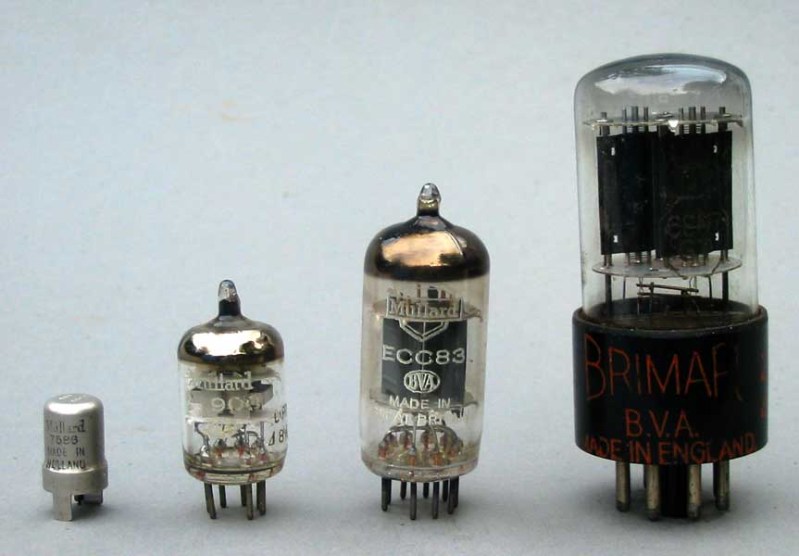 In 2021 all our electronics are solid state, in that they exclusively use semiconductor devices as their active components. Some of us may experiment with vacuum tubes, but only for curiosity or aesthetic purposes. Semiconductors have overtaken vacuum devices in all but the rarest of niche applications due to their easier design requirements, greater reliability, lower cost, and increased performance.

It was not always this way though, and there was a period at the start of the semiconductor era when transistors and vacuum tubes existed together side-by-side and competed directly. Vacuum tube manufacturers continued to create new devices into the 1970s, and in doing so they pushed the boundaries of their art in unprecedented directions. [David W Knight] has a page dedicated to the Nuvistor, something his calls the “final evolution of the thermionic valve”. His comparison photo seen above shows a Nuvistor on the left — a miniature vacuum tube you’ve likely never seen before.

Towards the end of the 1950s there was an inexorable move in radio frequency applications towards ever higher frequencies that left some traditional vacuum tubes lacking. Military radar, mobile radio, and broadcast radio were starting to exploit the VHF and UHF frequency ranges, and while the available higher frequency transistors were noisy and had poor gain, their vacuum counterparts suffered from stray inductance and capacitance in their construction. Miniature tubes and other designs such as “acorn” tubes with conductors emerging from their sides had appeared to address these issues, but for RCA these were not sufficient. Their Nuvistor range of tubes named to evoke the transistor and released in 1959 were like no other vacuum devices, being miniaturised to a similar size to the transistors of the day and having metal shells with ceramic bases rather than the more common glass envelopes.

Internally they had a co-axial design of tubular electrodes stacked one above the other, and with a new socket whose connections came straight out through the base rather than being bent at an angle to meet the pins as per previous tubes. Their manufacture was unusual too, instead of being assembled before evacuation and sealing they were mechanically assembled and sealed in a vacuum chamber. It’s fairly obvious reading the various data period documentation that their intended market was military rather than civilian (Excellent performance when exposed to nuclear radiation and shock is hardly a requirement for an FM broadcast receiver!), which may explain their relative rarity in civilian use.

I first directly encountered a Nuvistor when as a student in about 1991 pursuing the Holy Grail of an entirely hollow-state Hi-Fi, I bought a 1965 Sansui TU-70 FM tuner for the princely sum of £15 (close to $50 in 2021). It uses tubes throughout including in its stereo decoder, but it’s the FM tuner that caught my interest with its pair of 6CW4 Nuvistor triodes as RF amplifiers. Their diminutive metal cans are a shade bigger than the OC170 or similar germanium VHF transistors I’d have expected to see in a tuner of that era, but mounted on a chassis in their special sockets rather than on a PCB as would the transistors. I’m old enough to have experimented with germanium RF transistors and it’s fair to say that they’re both deaf and noisy, so I can see that the Nuvistors made sense in what would have been a high-end unit when it was made. But the considerable extra expense of all their hardware over a relatively cheap PCB for the transistor must have made them an increasingly unusual choice over the decade. They still appear in RCA consumer tube manuals from the 1970s, but by the 1980s they’re gone.

The Nuvistor then. A fascinating device from the end of the vacuum tube era, they were some of the smallest high-frequency vacuum devices ever created, but sadly their arrival came too late to be more than a footnote in electronics history. If you find one don’t let it go, you may not see another.

How To Build With Acrylic Using the Tools You Have

How Network Segmentation Can Protect Supply Chains from Ransomware Attacks

How to Map Your Digital Footprint : 2021 Guide for Businesses | UpGuard

Adware.ws is a free community forum where people like yourself come together to discuss and learn how to use their computers. Using the site is easy and fun. As a guest, you can browse and view the various discussions in the forums, but can not create a new topic or reply to an existing one unless you are logged in. Other benefits of registering an account are subscribing to topics and forums, creating a blog free.

This site has been updated, and re-launched, so we welcome all new malware removal questions and requests.